Before we can achieve growth, this is part 1 of the fundamentals for building a profit machine.

00:00 And welcome to another episode of growth hacking secrets. I’m your host Carlos A. Vazquez. And again, I wanted to say thank you so much for taking the time to listen to this podcast because I know you have a ton of options out there and I’m grateful that you’re even spending this little bit of time with me.

So I want to go ahead and just dive into today’s episode. And this one I call the profit machine fundamentals and this is a two-part series.

This is part one because it’s so full of information that I really want you to grasp that without you understanding this, you really minimize your chances of creating a winning successful campaign for your business.

And let’s just, let’s just go ahead and just dive right in. So the first thing I want to do is I want to talk about the mistakes that everybody tends to make.

00:42 And I know I make this mistake, I’m not immune to it, but you know, it’s more likely because I’m testing something out. But for the most part people don’t realize they’re making this mistake. And the mistake is that everyone has this tendency, whenever they have money to spend on advertising, that they go ahead and they spend as much money as possible to advertise how great their product is to a bunch of people that don’t know them and they don’t know what they’re all about.

Now, Ryan Deiss from digital marketer said it best. If you were to compare it to anything out there, this is like asking for marriage on the first date.

01:21 And and you know you may be able to go ahead and change someone’s life, but the reality is that you haven’t earned any trust yet.

So why would you expect someone to commit to you?

But you know what? The reason why everyone makes this mistake is because in dating you can go ahead and ask as much people to, to marry you if they say “no” you can just move on.

But in business and in marketing, every “no” just ends up costing us more money.

Okay, so it is our job as a marketer and a responsible business owner, to minimize the amount of no’s and get more “yeses”.

So let’s try to understand why people say “no” and why it’s so expensive to target these people.

I learned this better from Frank Kern,

Draw a circle on a piece of paper and mark a small part of that pie.

02:07 Let’s say the small part represents three percent of your market. This whole pie represents your entire entire market. This is everyone that could potentially buy from you.

These are people that need to buy your services right now.

Now, here’s the problem with targeting these three percent.

The problem is that everyone is targeting the same exact people. So it’s a bloodbath. It’s bloody, it’s expensive. It’s going to be tough.  It’s basically a buyer’s market at this point, right?

Because everyone is trying to target the same exact people.

Which is why people spend so much money just for the basic click because these are people that are already really want to buy right now, but what about the rest of the pie?

02:59 What about the rest of the market? Ninety-seven percent of the market is not being targeted and if they are, a very small percentage of people are targeting these people.  So it is our job to not focus on these three percent and focus on the 97 percent because it’s a lot easier to get more “yeses” from a 97 percent person than it is from a three percent person.

So if we want to increase your chances of getting more “yeses” from the 97 percent, we have to understand that there are six primary stages that every customer goes through.

The first stage is called the suspect stage. A suspect is someone that is interested in the subject matter and they’re willing to look at more information but they’re not ready for a pitch.

So if you try to go ahead and pick someone up at the suspect stage, you’re most likely going to get or “no”.

03:55 After the suspects stage, then there’s the prospect stage.

A prospect is someone that is aware that they have a problem or that there’s a problem and they’re willing to give up their contact info in exchange for more information, but these people are not really ready for a pitch yet. They’re a little bit warmer and you’ve already earned some type of trust with them.

Then you have a lead. A lead is someone that is considering making a purchase, but they just need to have some questions answered before they make that purchase.

Then you have a buyer, someone that says, “Yep, I want to hire you for your services, or I want to buy this product because I believe that you can help me.” So they want to give you money for it.

Then you have a repeat buyer, someone that is buying from you again.

So the reason why these three percent of the people are giving a bunch of “no’s” is because everyone is pitching to a bunch of suspects and suspects are not ready for marriage.

Leads are the ones that are closer to marriage.

So how do we move a person from states, the stage in a way where they don’t feel like they’re being sold to and they’re naturally progressing to the next step?

If there’s anything that I’ve learned about marketing and sales is that no one likes to be sold to, but everyone loves to discover great opportunities and if it makes sense, they’re going to go ahead and jump on the opportunity.

And now I’m going to leave it right there for this episode because the next episode I’m going to talk about how do we move a person from stage to stage naturally and not make them feel like they’re being sold to.

I’ll see you on the next step. 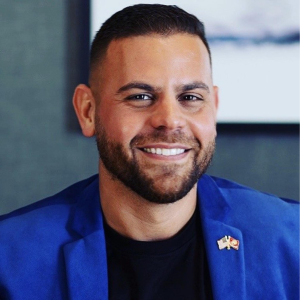 I help businesses inspire growth and help people build meaningful relationships with the power of virtual events and automations.